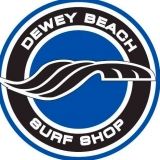 Originally a skimboarding camp, Dewey Beach Surf Shop has recently added surfing into their camp curriculum and is one of the few options along Delaware's short coast for week-long camps.

Surf and Skim camps are offered Monday thru Thursday from 9AM-3PM and Friday 9AM-1PM, for 12-17 year olds. Unlike many camps, Dewey will provide food and drink each day from a variety of local restaraunts. Dewey Beach Surf Shop promises to get all campers into the surf no matter the conditions- if the swell is down, campers skimboard, if it's up, they surf!

At the end of each week, DBSS hosts a surf contest for all campers to participate in. Campers learn the basics of surf competition in addition for the chance to win prizes and compete against their friends!